At Virospack we have a strong commitment to the environment. We improve day by day with a clear philosophy “companies not only have the responsibility to produce or expand in a sustainable way, but also to raise awareness and engage their employees about the importance of the impact of their work on the environment“, Vicenç Rodríguez – CEO.

Many are the environmental improvements achieved by Virospack in a short time as a result of multiple actions and initiatives included in our Sustainability Program. Among them today we highlight the Environmental Proposal Competition and the winning projects.

At the end of 2019 Virospack signed a collaboration agreement with the Vicente Ferrer Foundation (https://fundacionvicenteferrer.org/es/la-fundacion). This foundation has several projects underway to eradicate poverty and ensure sustainable development in South India.

From the Virospack Environment Committee, several projects were preselected, and all employees were invited to vote to choose one. The winning project was the construction of water structures.

Virospack was launching at the same time its Environmental Proposals Competition. A competition that would select the three best proposals that would be awarded. Although what is really important about this initiative is that all savings achieved in the company over a year as a result of the winning environmental proposals will be used to help India’s population without drinking water, with the intention of preserving the natural water of the area and to provide them with water to grow and drink.

The involvement of the full staff in this project has been a success. For this reason, Virospack Environment Committee wants to applaud and thank the participation and the quality of all the received proposals.

Given the current situation caused by Covid-19, last week Virospack summoned the three winners for an intimate awards ceremony, without any event and respecting all security measures. Isabel Pérez, Operations Manager at Virospack, and Santiago Guasch, Head of the Paint and Metallization sections, -both members of the Environment Committee- gave the awards to:

Torcuato Hernández from the Metallization section of Virospack, is the winner of this first edition.

His project to reduce the energy consumption of metallizing machines has been awarded with the first prize. His proposal of a new program has allowed the metallizing section to save more than 20,000kwh. 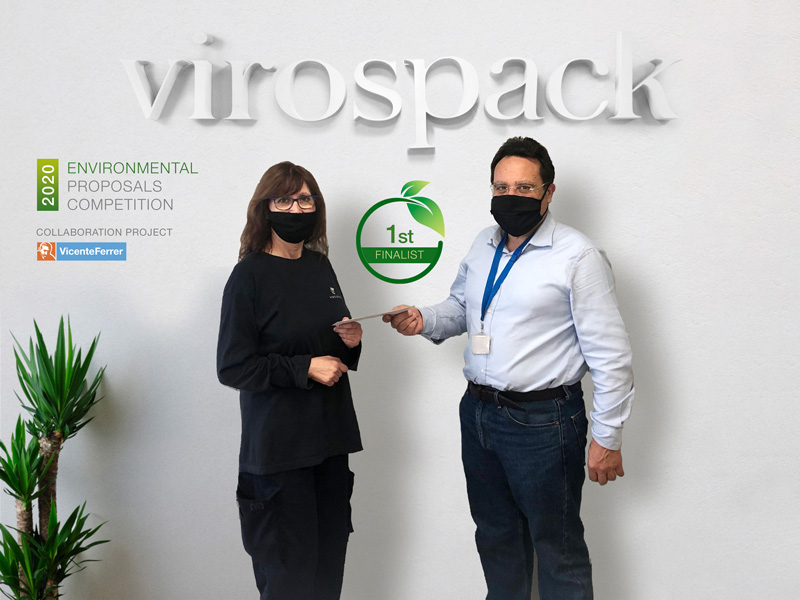 The second prize has been to Montse Guerrero, Head of the die cutting section.

Her proposal for casting water waste with silicone to avoid hazardous waste has led to the reduction of one ton of this type of waste per year in its section.

Carmen Domenech from the glass section has won the third prize.

The design of new boxes for recycling at the end of the painting and metallization lines has made recycling easier for all colleagues, reusing elements that without these new boxes would have being discarded in the glass section.

To the three winners, congratulations. Also, to the rest of the staff, and many thanks to all.

This website uses cookies to improve your experience while you navigate through the website. Out of these, the cookies that are categorized as necessary are stored on your browser as they are essential for the working of basic functionalities of the website. We also use third-party cookies that help us analyze and understand how you use this website. These cookies will be stored in your browser only with your consent. You also have the option to opt-out of these cookies. But opting out of some of these cookies may affect your browsing experience.
Necessary Always Enabled

Any cookies that may not be particularly necessary for the website to function and is used specifically to collect user personal data via analytics, ads, other embedded contents are termed as non-necessary cookies. It is mandatory to procure user consent prior to running these cookies on your website.